The performances highlighted the importance of the event, as the race was the final opportunity for the British athletes to secure their selection to the GE Great Britain Team for the ITU Junior Triathlon World Championships at the Barfoot & Thompson World Triathlon Grand Final in Auckland next month. Gordon finished tenth in last year’s ITU Junior Triathlon World Championships, and who came into the race on the back of a strong sixth place finish in the GE Strathclyde Park Triathlon will hope his victory completed in 56.46 will be enough to secure his selection to the GE Great Britain Team in Auckland. Commenting on twitter after the race, Gordon said: “First win at a European Cup today; hard work in the Portuguese heat.”

In the junior women’s race, Maddy Wizner almost made it a double celebration. Maddy crossed the line in a sprint finish alongside Luisa Condeço from Portugal. Both athletes were given the same time of 01:04.23; however, the Portuguese just edged it for the win. Maddy commented after the race: “The race was tough in the heat, but I am pleased with the result. It was just a shame to miss out on the win in the final sprint for the finish line.” 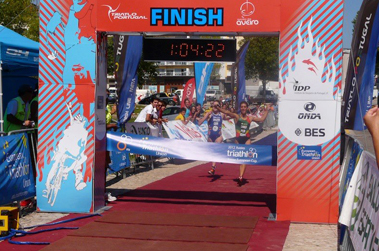