There comes a point in the life of every sportive cyclist when you have to take your bike on a plane. This is always slightly concerning. I remember on the morning of my first Etape hearing a couple of horror stories about people whose beloved bike had been destroyed by luggage handlers or falling out of the loading bay of the plane. At the time I remember feeling relieved that I had driven all the way to the south of France with a bike on top of my car rather than go by plane. 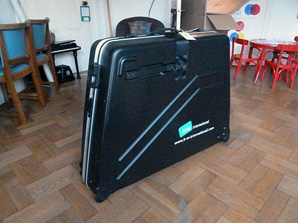 Now I have (even) less time for escaping to the Alps and Pyrenees for a week of training or to do a Marmotte or Etape, taking a plane is the only realistic option. And that means taking a bike box or a bike bag.

I do have a bike bag - picked up in a Condor sale for about £50 - but have only used it for putting the bike in the back of the car (to ensure that all our other bags don't get covered in oil) or once on a coach journey up to Scotland, where the travel company insisted bikes had to be correctly packed and could not be put in a box. Realistically, most bike bags that I have seen are not robust enough to withstand the rigours of airports and plane loaders, although B&W do make one which has plastic tray to protect the gears and chains, so perhaps that is a better option than the cheaper version I have.

I was sent a B&W hard shell bike box to review. When it first arrived my reaction was "It's huge! You could fit a small child in there". On inspection, I think you could probably fit two small children it. It's enormous. I didn't actually try fitting two children in, although I did get my nine old to stand next to it to confirm that it would be theoretically possible. 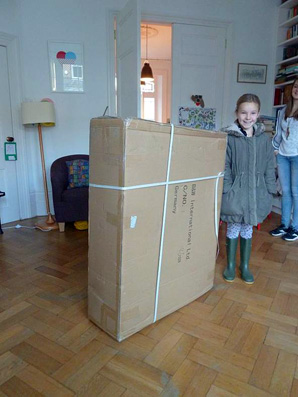 The dimensions are 1150mm (base)/850mm (top) x 870mm x 295mm, as the top of the case is smaller than the base, as shown in our pictures. This is enough to comfortably fit a racing bike with up to a 62cm frame, as well as plenty of other gubbins. The case weighs 10kg when empty (according to my home scales), which is on the lower end of the weight range for bike boxes. If your house doesn't have lots of room for storage or you don't have a garage, your partner/housemate may not be entirely sympathetic to having such a large object sitting around.

The box is very sturdy indeed. The technical blurb tells me that it has an aluminium frame with strike proof ABS moulding, which I guess means very hard plastic. It looks and feels like it could take a major impact. There is extra protective moulding around the wheels and corners of the box, which are where it is likely to be most hit. One feature I particularly like is that the wheels can be replaced, unlike many suitcases which have the wheels moulded into the overall case and when they go kaputt, the whole case is useless.

I had originally planned to review this case on a late January training trip to Majorca but I picked up a shoulder injury when landing hard on an icy road early in the year and had to postpone. So it wasn't until mid April that I got out to Tenerife to try and get my fitness back to sensible levels again. With Chris Froome on island at the same time, I had some unattainable targets to aim at. 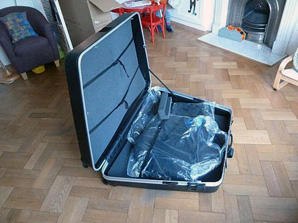 Packing up the bike case, I have to admit that I had forgotten quite how much work it is to properly pack up a bike for travelling. Used to lifting it onto the top of a car, I'd somehow not worked out that I would need about 90 minutes to pack up my bike properly. B&W supply two padded wheel bags with internal pockets, bike fork spacers and a foam chain-ring guard but you need to arm yourself with your own plastic ties, foam for wrapping the rear derailleur and protective cloths for the sprockets and other parts. In other words, do not leave your packing until the morning of the flight. This would be especially true if you've never properly taken a bike apart before - bike boxes are really only for people who are reasonably confident about taking apart and reassembling a bike (which is a skill we should all have but quite a lot of riders do struggle with). There is no point getting to your destination only to find out that you can't put the bike back together again without the help of the local bike shop! You can read the B&W manual before buying to get some idea of what the process is. 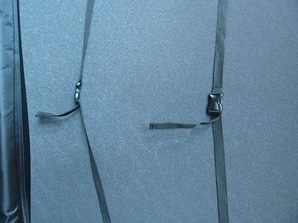 Bike packed, I set off to Heathrow for my Iberia flight. Thanks to my British Airways silver membership the bike box counted as my second piece of free luggage, although the check in lady did look slightly askance at the size of it. The B&W manual has a useful instruction guide to which airlines take bike boxes and how much they currently charge to carry them, although these only list airlines servicing the German market (they are a German company). You should expect to pay somewhere between 30 euros to 75 euros per flight, according to this guide.

The case has two handles, one on the side for pulling it along and one on top, which I only used for lifting it when empty; it pulls along okay although it doesn't feel brilliant on bumpy ground and I wouldn't want to have to pull it enormous distances. The box also locks, for those who don't trust airline staff not to snaffle their possessions. Because of my baggage allowance I only put my bike in but there was plenty of extra space for energy bars, bidons, track pump and other equipment and if I had packed really light I could probably have used it as my sole suitcase for the trip. The official manual suggests a maximum weight of 30kg but I am quite good at ignoring manufacturers' instructions and while airlines wouldn't like it I am sure you could comfortably fit up to 45kg of kit into the case.

Arriving in Tenerife, the box was still in great condition and everything was undisturbed inside. It had almost no scuffs, but that was probably because I had a black case. It comes in a range of colours (red, light green, blue and black) and I would wonder if the coloured ones would scuff more noticeably. Anyway, black is the proper colour for road cyclists.

The same was true on the way home in terms of everything being in good shape, although Iberia did kick up a bit of a fuss about its size and tried to charge me a supplement (they seem slightly confused about their relationship with BA). I didn't rent a car in Tenerife but had I needed to I doubt it would have fitted into the smallest size of rental car and I would probably have had to get a midsize, especially if I want to use the rear seats at all.

The B&W bike case retails for £245, although can be found online for around £220. Is this good value? If you asked me whether I would spend £245 on a normal suitcase, I think I would be hard pushed to say I would. But once you see and use this case, you realise that it is an incredibly robust piece of equipment and I can't think of a safer way to ensure that my bike would be in one piece when I arrive on the other side of Europe or the world. Given the replacement cost of my bike frame is over £2000 and the other equipment on it would cost the same again, the cost of protecting it in the B&W box seems more reasonable. If you travel abroad by plane with your bike with any frequency then the B&W box will pay for itself in a short space of time, even if just by giving you the peace of mind that your bike is in one piece when you unpack it, ahead of your cycling holiday or race.

This was definitely one of the most popular boxes being used by UK cyclists in Mallorca. This, I think we can be fairly sure, is because the B&W box is a great little box that is very, very competitively priced! 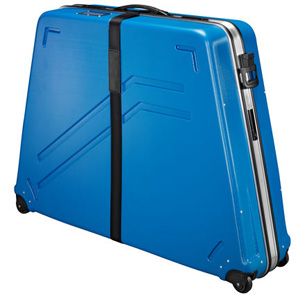 Price is one thing, but it has to deliver your bike in one piece and the evidence suggests that it does just that! The box is robust - the hard plastic (ABS) construction is tough, with a rigid aluminium frame and includes a double shell thickness corresponding to where the wheels lie within the box.

Packing the bike is very straightforward and the instructions are easy to follow - it took me about an hour to pack and unpack from start to finish. The space is confined, but provides a snug fit for my 58cm bike frame. Two padded wheel bags are provided, which allow the wheels to 'float' in the box quite safely. The bike frame straps firmly against the padded interior and can't move. With the bike nestled in, there is still loads of space to pack other items for extra protection - clothes, helmet etc

I've now used the box on a couple of overseas trips and though it is showing a few very minor signs of wear it has still retained the original shape perfectly and nothing has failed. Needless to say, my bike has remained in tip top condition throughout! Despite looking a lot less impressive or strong when compared with much more expensive boxes, it is clearly very tough! (Though I admit that it does appear a little more flimsy in comparison).

The box is easy to manoeuvre around airports and hotels and the two exterior handles are well placed. It is also slim and compact - far more so than some of the bikes boxes on test and that makes for easier storage when not in use! Another plus!! 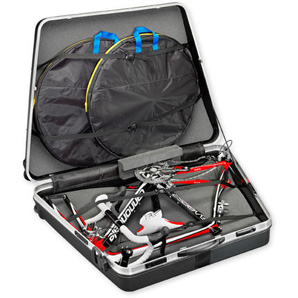 My one gripe is that the locks are difficult to do up, though this actually reflects the way the case is closed. If the contents allow the lid to shut properly and the lines are right (best done on a flat surface like a hotel bedroom floor!), the locks align and close perfectly first time, every time. If they don't close, it means that the lid isn't aligned, which either means the case is warping out of line due toan uneven surface underneath or because the contents haven't been optimally packed. When the locks align and close properly, it's a good sign that you've got the packing right! (Those of you who have ever wrestled with a car roof box will know where I am coming from).

The box comes in a several colours, the blue is rather fetching, but if you want to make an impression then the lime green might float your boat! For the price tag, this is cracking little box and one that I wouldn't hesitate in recommending!

Note: Prices were correct at time of articles going to print