B&W provided a bike case for Katherine Sharp and her close friend Tegan to attempt her epic charity ride from the top to the bottom of New Zealand.

Katherine "On 27th. January this year I flew to Auckland, New Zealand to meet Tegan, a friend from Sydney, Australia. Our aim was to cycle 2,500 km from the top of the North island to the bottom of the South island in just three weeks. It was a sponsored trip to raise money for MacMillan Cancer Support, a charity that sadly so many families have experienced the benefit of. Tegan was cycling for a local Aussie cause. "

"The trip was unsupported i.e no- one following behind with puncture repair outfits etc, and no-one driving ahead of us on campsite reconnaissance missions! It was a challenge, and it wasn't without its trials and tribulations. Much of the terrain was very hilly and the heat, particularly in the North, often extreme. The one thing I could not have done the trip without, was my B&W International bike case. This product got my bike from Manchester to Auckland via Dubai and Sydney (and home again) without so much as a scratch. Even better, all I had to do was take off the wheels, didn't even need to lower the seat post to put it in the case! This really is some piece of kit! Everything we took was carried with us on the bikes, clothes, tents, sleeping bags and spare parts."

"On day two Tegan suffered quite a bad accident, roadworks had left a gravelly surface that she skidded on and came off the bike. The nearby medical centre patched her up and we carried on and did 120km later that day. It was only when she arrived home that she discovered she had broken her thumb and dislocated her shoulder. Some nights we camped by the ocean, nothing pre-planned, just the nearest site to us as darkness fell or fatigue kicked in. We pitched on farmers fields, orchards, and the back gardens of wonderful friendly locals who welcomed us like heroes and looked after us, and fed and watered us when necessary. The New Zealand landscape is amazing, the people charming and hospitable, and the mussels and oysters unforgettable!"

"We reached Bluff after thirteen and a half days tough cycling, not a lot of time for photographs I'm afraid, but we were now almost a week ahead of schedule so we treated ourselves to a night in the local motel, followed by a couple of days in beautiful Queenstown, much like home on a larger scale, lakes and mountains all around. Our last two nights were spent in Auckland and time for some sight-seeing. It was the experience of a lifetime and raised over £3,000 so far. . . . . still time to donate! Thank you to everyone who sponsored me and whose thoughts and good wished kept me pedalling. "

Congratulations to Katherine and Tegan on their huge journey and the money raised, we're glad we could help! 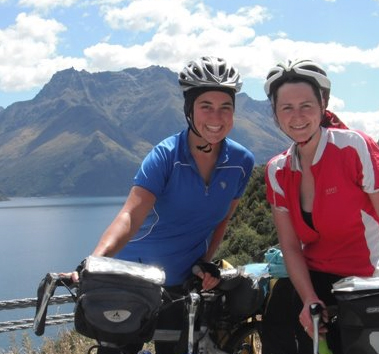